The Women in Resources National Awards were held on Tuesday 6 September in Canberra, and acknowledge the significant achievements of individuals, and showcases leading organisations in the mining industry. The Gender Diversity Champion award recognises an individual – male or female – for excellence in the encouragement, promotion and advocacy for the attraction, retention, inclusion and promotion of women within their company and/or the Australian resources sector.

Michelle was promoted to Superintendent – Human Resources, Training & Organisational Development in 2017. Since then, she has played a significant role in developing championing initiatives supporting a diverse and inclusive workforce. Michelle has overseen the introduction of the parental leave program, which is available to parents of both genders and has been highly successful and resulted in a 100 percent return to work rate.

Michelle has championed more flexible work, including advertising jobs with flexible work arrangements and overseeing the first job-share arrangement in an operational role. Michelle is Northparkes representative on Parkes Domestic Violence Committee and led the work that resulted in Northparkes attaining White Ribbon accreditation in 2016. In 2020, Michelle led work and rolled out an update to employee performance descriptors that recognises and rewards employees and leaders at all levels who lead with increased care and support initiatives to create diverse and equitable teams.

Jianjun Tian, Managing Director of CMOC Northparkes would like to “thank Michelle for her commitment and dedication to her work and our organisation. Please join me in congratulating Michell on this significant achievement.”

Michelle’s award recognises her ongoing commitment to diversity and inclusivity in the workplace and promotes CMOC Northparkes as a leader in the mining industry. 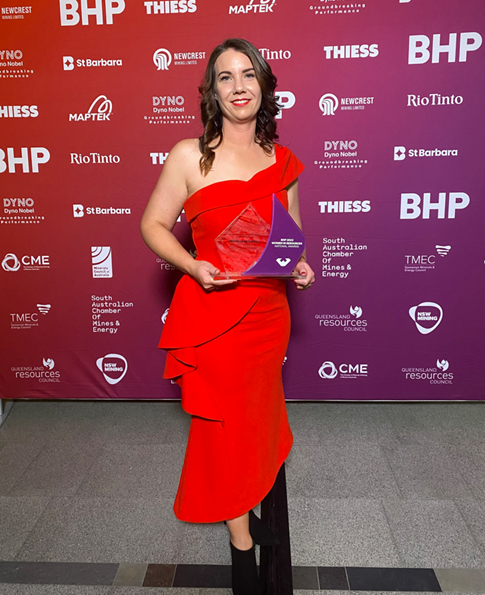